It is the second week of our holiday in Panama where we are visiting our friends, American Family. We are relocating to a beach resort two hours from the city. We have hired a mini bus to drive the nine of us: our family of five, and American Family’s four. We have approximately fifteen electronic devices between us all. My Lawyer and I gaze out at a landscape that is now the norm for American Family; mountains, jungle, ramshackle houses with colourful satellites atop. Most of the houses have doors. There is an election in Panama, and campaign posters jostle for our attention. Candidates all go for the American Realtor Pose: arms crossed, toothy grin, posing sideways over their shoulder, as if you’ve just called their name after they’ve told a really good joke. Everyone is laughing, but they are all just out of the shot, so sadly you can’t see them. But everyone is laughing. Really. THEY ARE.

Stony silence replies, because they are all glued to iPads, addicted to Fortnite. Verslaafd, is the Dutch for addicted; enslaved. I leave them to it. I am very judgmental about video games, until that judgment threatens to destabilize relative peace and quiet, to which I am verslaafd. The price of robust parental mental health is usually just a handful of your most valued principles. Once you’ve surrendered the first few, it just becomes easier and easier.

I look out of the window. The light-brown landscape is punctuated with scattered pockets of green; rainy season is on the way. Ferns are bursting through the dry dust, unfurling their clenched fists, testing the air.

But the land is mostly still parched, until suddenly, up ahead, a sea of green appears. A hiss of sprinklers in the distance makes me need a wee. The minibus stops at an entry gate.

“We’re here!!” says American Dad, before embarking on a thorough security check to get us on the other side, where the grass is truly greener.

“NO!” shouts the five year old. “I haven’t finished my game!” 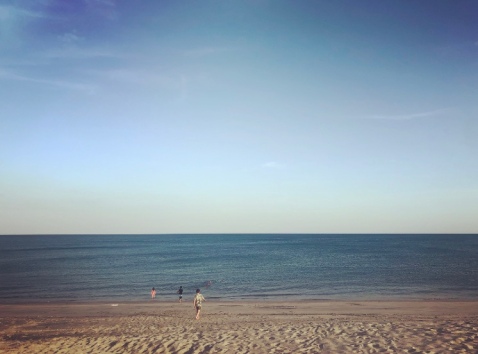 But I’m not sure that you want to hear about the ins and outs of our luxury holiday on a private beach. I mean, I could tell you a whole ditty about getting a massage that I can’t enjoy because it is too perfect, until I get bitten by a red ant, which is just enough discomfort for me to permit myself to relax. Or another: as I loll in a hammock by the pool, sipping wine at 2pm, the kids make a video about us, a superhero family, and my name in the video credits is “Katara”. After further questioning, it transpires that what they actually mean by “Katara” is Caterer; She Who Provides Food, which is HILARIOUS! Because I’m not providing ANY food! I’m not doing a fucking thing! I mean, there is an actual Katara at the beach house! WHO DOES EVERYTHING! Real Katara doesn’t cut the five year old’s apple in quite the right way. That is an awkward moment. I have to bite it into the right shape for him, hidden in my hammock so I don’t hurt Real Katara’s feelings. The five year old holds my wine. Such is the hilarity that can be found in our privilege.

No, I don’t think you want to hear about that; I know you well enough by now. Let us loiter, then, at a moment precisely halfway into our holiday, when My Lawyer looks up from his phone, furrowed with concern.

“I might have to go to San Francisco,” he replies.

I give myself a few seconds before replying. There is always a certain static in the calm before a storm. You can feel it in the air; sharp, stinging. Like the bite of a red ant.

My Lawyer flies business class to California the day before we are due to fly back to Amsterdam. He does not yet have a return date. Perhaps it is this uncertainly that gives me that distinct pre-exam dread; more likely, it is the prospect of flying for eleven hours with the kids on my own. Overnight. With two of the kids in the row ahead of me, next to their father. Oh no, wait. HE’S GONE.

He pauses. “Are you in business?”

In the absence of anything positive to say, my good friend nods. Smiles. Makes a strange noise in his throat.

He shrugs. “Well, once they shut that door, there’s not a lot you can do.”

Here it is, then; here is what you came for. An hour-by-hour recount of trans-Atlantic misery. Part of me relishes the prospect; this is what I deserve after the preceding two weeks of serviced, privileged luxury. There is a certain inevitability about this that I can embrace; a plane-sized red ant bite. Pity My Lawyer, alone in business class. How will he clear his conscience?

“I want to sit next to Mummy,” says the eight year old, as we sit in Departures.

“The baby has to sit next to Mummy,” says the nine year old.

“I want to sit next to her too, but I’m not making a fuss,” says the nine year old.

“I LOVE HER!” roars the eight year old. “ARE YOU TELLING ME NOT TO LOVE MY MUMMY?”

“She can sit next to you,” sighs the baby, five. “I’ll go next to him,” pointing at his brother. “He can help me with Minecraft.”

Probably, your baby can’t mediate yet. Don’t worry. Our baby is very advanced.

The new seating arrangement lasts for approximately three minutes. We have not even taken off before I have to switch the five and eight year olds back. The eight year old doesn’t give a shit, which rather undermines her original argument. As others take their seats, I realise that booking ECONOMY COMFORT as one small woman and three children under the age of ten was relatively pointless; moreover, that the majority of our fellow ECONOMY COMFORTEES on this KLM flight to Amsterdam are, unsurprisingly, giant Dutch people. The man who sits next to me tries in vain to fold himself as small as possible, but his arm, tightly packed to his body, still spills over our armrest. If anything, we have paid more for less room.

We get comfortable – ECONOMY COMFORTABLE. Shoes off. Screens on.

Hour One: I begin reading The Left Hand of Darkness, which was pressed into my hands by American Dad before we set off. I give up after a page and eleven interruptions from the baby (five).

Hour Two: Giant Dutch Man next to me watches The Favourite up to the scene when Emma Stone fingers Olivia Coleman, at which point he panics and turns it off. My children begin their rotation of toilet visits that will continue for the next ten hours.

Hour Three: I drug my kids. I give them melatonin. I ummed and ahhed a lot about this decision, and emailed myself some articles to read about it, but I didn’t read them because of the massages and the hammocks and the wine. The lights in the cabin go out.

Hour Four: Giant Dutch Man is asleep. His head is lolling towards me. He is wearing an eye-mask and lies diagonally, forming a barrier. What must it be like? To take up so much space in the world? How often does he feel bad about it? I mean, he can’t shrink. Right? But would he? If he could? 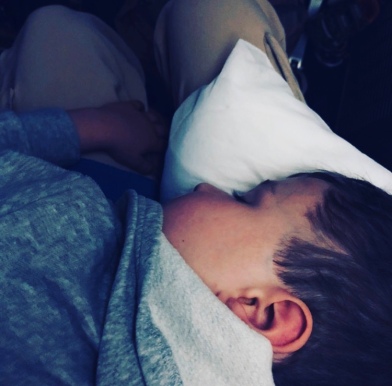 Hour Five: Melatonin is a fucking piece of shit. The baby (five) is asleep, and I’m pinned beneath him, but whispered complaints drift back to me from the older two. “We should have gone in that first bit,” says the eight year old, indicating the business class area in front of us. “That looked a lot better.”

“I need the toilet,” says the nine year old.

I am hemmed in by Giant Dutch Man next to me and the baby (five) on top of me. “Can you go by yourself?” I say to my child who is terrified of being locked into public toilets.

“Okay, mum,” he nods. He takes a deep breath and off he goes. Red ants nip at me.

“Did you book these seats,” says the eight year old, “Or did Dad?”

It is important, when preparing to lodge a formal complaint, to submit it to the right office.

Hour Six: A tiny container of water is provided to everyone who is awake. It is more of a sample, really. My mouth is sticky dry. I try to peel open the foil lid one-handed. Just as I manage, the baby (five) wakes up, shouts “I’M NOT SLEEPY!”, drinks two thirds of the water sample and then passes out again, kicking the remaining third of the sample to the floor as he does so. The Left Hand of Darkness – American Dad’s favourite book, entrusted to me until we next meet – takes a hit. I fan it out over my rucksack. We are halfway.

Hour Seven: I notice that, somewhere along the way, I have lost half a fingernail. My skin shines where nail should be. Giant Dutch Man, asleep beneath his eyemask, turns to face me, crossing his arms like the Panamanian presidential candidates I saw on posters in my former life of luxury. I am beginning to regard Giant Dutch Man as a kind of father figure. You don’t often get a chance to stare at a stranger’s face like this. I can’t see his eyes, of course. I imagine them, wide-open, behind the mask. I wonder if anyone has ever died on an airplane, behind their eye-mask. You wouldn’t know for a while.

Hour Eight: Giant Dutch Dad turns his back on me – at least he’s not dead, I suppose – and so I stare at the baby (five). My arse is dead. I am still thirsty. The eight year old eyeballs me accusingly through the gap in the chairs: “This. Is. HORRENDOUS.”

Hour Nine: Lights go on. We are allowed to wake up. Many fucking awful people choose to stay asleep. Giant Dutch Dad wakes and lifts his eye-mask. He glances at the baby (five) and looks up at me, smiling. His eyes are not at all as I’d hoped they would be. It is not a surprise. I have my father’s eyes; the only place I can see them now is in the mirror. I smile back at Giant Dutch Dad. It is not his fault, after all.

Hour Ten: The baby (five) wakes. I check The Left Hand of Darkness – it has dried out, more or less, and will survive. I put my shoes back on and discover where most of the water actually went. I wiggle my damp toes. It is oddly refreshing.

Hour Eleven: I find my fingernail! How about that! Unfettered joy. We land, and I leave my torn nail on the plane, casting my DNA forth into the world for another adventure. Egyptian mummies have hair and nails still mostly intact. Imagine: your nail cuttings, now, scattered where you left them, bitten, cut or torn. Remnants of your reach across the world.

But, by the way. You’re still covered in shit. 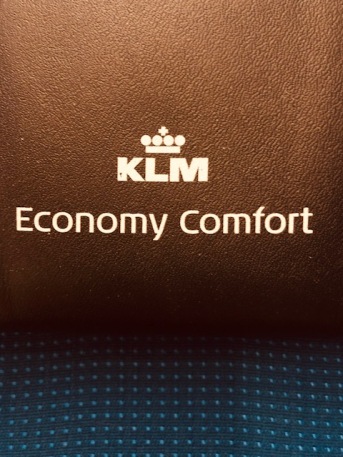