Dutch school is out. There was an end-of-year dance show. The children practiced the dance on the morning of the show, and then sort of did the dance at the show, and are now repeating the dance every day of the summer holidays.  I am a big fan of teachers, but in my darker moments (and by darker moments, I mean when children are doing the dance on my eyes, my actual eyes, my actual eyeballs, they are INSIDE MY SKULL), I can’t help but feel that there was some malevolence behind this end-of-term dance indoctrination. I mean, probably I’m wrong, but isn’t there a chance – more than a chance – that the teachers of my children are hiding behind dark corners of Amsterdam, Fagin-like, humming the tune of the dance at child-height as we walk past, their only motivation being the bitter schadenfreude of the underpaid and underappreciated? Like I say, I could be wrong. What do I know about being underpaid and underappreciated?

Possibly, the teachers thought they were helping, giving the kids a day-long workout on the last day of school. I am reminded of a time, before children, when My Lawyer and I looked after a friend’s puppy for a weekend. The owners had taken the puppy out for a long walk and a swim in a lake to wear her out shortly before delivering her to us. The dog ingested blue algae in the lake, and spent the weekend vomiting and shitting liquid faeces between the cracks of our Edwardian floorboards. At the end of the weekend, My Lawyer suggested that, rather than get a puppy, we should have a baby instead, and, well. Here we all are. You never know where these “thoughtful acts” will lead. All I’m saying is, it’s all very well trying to be nice or whatever, but ultimately it makes more sense to just drug your dog, avoid dark, Dickensian corners and seriously consider the benefits of a faux-wood lino. They’re very convincing these days.

After a couple of weeks of non-stop dancing, My Lawyer and I consider the possibility that, with a change of scenery, we might yet live. For reasons I won’t go into – but relate to My Lawyer’s lackadaisical attitude to my almost fool-proof travel document filing system – we are unable to go abroad for our summer holiday. Fortunately though, we, as a species, are slowly setting fire to the planet, so we’re able to enjoy a near-tropical experience right on our doorstep. We’re going on a Dutch Holiday!

We hire a car; a really good car, which even has a television built into the dashboard for the children to watch.

This is our first car journey in the Netherlands, and driving out of Amsterdam is pretty straightforward. We kill no cyclists and head south, to a place called Zeeland, which you should pronounce, with very wide eyes, like this: ZAYLUND. That’s good!

Zeeland is two hours away from Amsterdam, close to the Belgian coast. It is home to miles of sandy beaches and is famous for its Delta Works, which were built after the devastating flood of 1953. Zeeland is mostly at or below sea level, and so the flood killed nearly two thousand people. You can relive the disaster at the Delta Experience in Deltapark Neeltje Jans. All in all, it is an obvious choice for a family holiday.

We arrive to our Airbnb in the late afternoon, but due to the recent onset of the beginning of the end of the world, it’s still very warm, and we decide to go to the nearest beach. 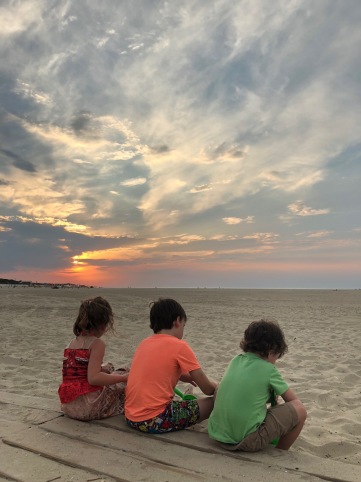 The beach, Vrouwenpolder, has a couple of restaurants, wooden play equipment that hasn’t been burned down, horse shit and a desert between us and the sea. We stagger to the water, swim, and stagger back to a restaurant. I’m determined to eat mussels, even though it is late July, when many people will tell you they won’t be good yet because there isn’t an “r” in the month. But I’ve done some research, which means that I’ve done what people always do when they say “I’ve done some research”: I kept googling until I read what I wanted to read: Eat mussels when there is an “r” in the season, if you are speaking in Dutch. Zomer, Herfst, Winter. Result.

The next day we visit Domburg, which our genius children enjoy translating as Stupid Mountain. Domburg is further down the coast, and is, according to my friend, where Rich Dutch People go on holiday. There are some fancy shops and good coffee, so it could be true. If I was a Rich Dutch Person, I’d probably go to the Bahamas or the Seychelles, but who knows what goes on in the mind of a Rich Dutch Person; for example, they wear a lot of strange hats. Between the town and the beach, there is, shockingly, a small hill. Maybe this is the Stupid Mountain. We climb the hill to a vantage point over the North Sea.

“WE’RE ON A DUTCH HOLIDAY!” I call back over the gusts.

“It looks like Norfolk,” I say as we get into the car. I am very, very funny.

The next day is my birthday. I am now a thirty-eight year old unemployed person, blogging to hundreds, qualified for nothing. I may run for office soon. My main present, alongside a load of shit that the kids have made, is a day alone. Well, not a day; five hours. Five hours in Domburg. It sounds like a film; She was a mother of three, it was her birthday, and she was finally alone… what could she do with FIVE HOURS IN DOMBURG?!?!

I wander through a shit market (do you ever wonder about markets? Everyone’s like “oh go to that market, I got all this amazing vintage stuff” and then you go and it’s hair braiding, hats, shitloads of dried fruit and quite a lot of pervy men?). I find the best coffee place, write a blog post, walk along the coast and paddle in the sea. All alone. What a gift.

After five hours, I’m bored and I’d quite like some attention. I text My Lawyer.

The kids are playing nicely, he says. Want an extra hour?

In a fit of what I want to call Stockholm Syndrome but I suppose is actually some sort of Motherly Bond, my spirits fall a little. I walk up Stupid Mountain again and take a seat at the top. I look out at the North Sea, and I wonder what part of England I’m facing. My geographical prowess is akin to My Lawyer’s travel document security measures, but I guess that we must be almost level with London this far south. Eventually, I check Google Maps, and find that actually I am facing almost directly North; if I took off from here, I’d glide up over the North Sea, catching sight of Norway on my right. I’d fly over the Norwegian Sea, possibly glimpsing Greenland in the distance on my left. I’d see more and more ice; or less and less, depending on how you look at it.

The next day, most of us nearly drown. We visit Oostkapelle beach, which falls between Vrouwenpolder and Domburg. Oostkapelle has a much shorter run of sand down to the sea, and as soon as we get there, the nine year old points out an island of sand a short distance into the water. He rushes in.

I look to the shore I see that My Lawyer is waving – wait, no – beckoning. He’s telling us to come back. I look around us, and suddenly realise that the sand island that we are standing on is smaller. A lot smaller.

“MUMMY!” The nine year old is suddenly swept forward by a wave, and because of the dip in the sand and speed of the tide, he now has nothing beneath his feet. His head bobs up and down, spitting water, screaming. The seven year old, now clinging to me, hollers at her brother, and I start swimming towards him with the seven year old on my back. I tell him to keep treading water, but he cannot hear me; he is blind with panic, and deaf beneath his own screams. I know that, when I get to him, the weight of the two of them together will pull me under, but I swim anyway, because you can’t not swim towards your drowning child. That’s just not cricket. I look towards the shore and see that several people are running towards us; we’re actually just a few metres from the shore – what a ridiculous way to die.

“PLEASE LET ME LIVE!” Screams the seven year old on my back, which strikes me as overly dramatic given that she’s in the best position of the three of us. My heel scuffs the floor just as a large German man grabs the nine year old and walks with him to the shore. A tall Dutch lady takes the seven year old off my back and kisses her head, which I find weirdly offensive, and my first thought, on survival, is this:

Shit. We are a spectacularly short family.

We recover, we learn our lesson, and we go back into the sea just half an hour later, keeping the real shore in reach and laughing about how the four year old carried on building sandcastles through the life-threatening commotion.

But, later that night, I cannot sleep, or I daren’t, in case I glimpse one of those other dimensions, where things end a little differently. Those parallel universes, in which I’ve let my children out into the sea; I’ve dangled them into freezing canals; I’ve crossed the road with them without checking on a sleep-deprived day; I haven’t cut a grape in half;  I’ve put them to sleep on their tummies because I couldn’t take the crying any more; I ate too much mercury accidentally. All these different ways, in those other dimensions, that I have killed my kids.

We spend the last few days in Vrouwenpolder; flat, shallow, endless sand. Difficult to die in.

“It’s so far to the sea!” cry the kids, staggering over the dunes.

“Looks like Norfolk,” confirms My Lawyer, nodding at all the sky.