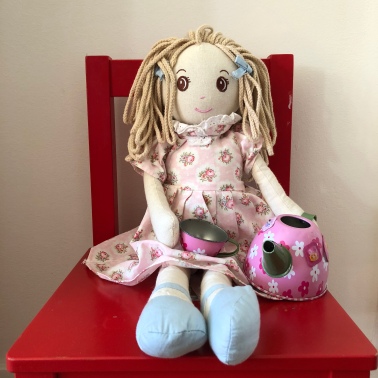 Is there a more contradictory creature than the British People-Pleaser? Bending over backwards to elicit the approval of virtual strangers whilst simultaneously condemning said strangers for a multitude of sins that could also pass for normal human behaviour; what did that sigh mean? What did I do, to deserve such judgemental exhaling, when all I did was offer them a cup of tea, which I do not have time to make but am now obliged to, because here is this unannounced scoundrel at my door, without so much as twenty-four hours’ notice? It is possible, but unlikely, that they are simply breathing out. A pox on them. I hope they don’t mind that we have no Earl Grey.

The British tightrope betwixt Shakespearean cursing and self-flagellation – worse if you are a woman, conditioned as we are to flagellate both self and fellow female – is usually a solitary pursuit, but today I find myself sharing the load with My Lawyer, who is collateral damage in my latest prat-fall into the pyre.

“Pick him up from voorschool at one,” I say, packing my bag.

“You’ll be back at three?” asks My Lawyer, his computer pinging relentlessly with email alerts.

“He will need a poo when he comes home.”

My Lawyer looks at me with an expression that straddles both panic and deep-seated contempt. Not much makes me happier than when My Lawyer looks at me with panic and deep-seated contempt. It is this expression that I fell in love with thirteen years ago, when I told him I thought space travel was a futile endeavour. Now, he has the beard that I forced him to grow, which renders him both sterner and acutely facially uncomfortable. He is quite perfect.

Neither of us wish each other luck, because we are British people in love, so we can forgo any of the niceties we extend to objectionable strangers. But I do need luck, because I am going on a Dutch school trip that I volunteered for without my own permission, and without checking whether or not I had any clashing appointments (which I did) or if I had childcare for the three year old (which I didn’t). So here we all are, doing things for that unknowable currency of goodwill; the bitcoin of emotion. It may or may not come to anything.

Mercifully, it is an afternoon trip with the eight year old, who is currently the least difficult one. We are going to the theatre. I wonder if I might be able to sleep.

I arrive at the school at lunchtime. Approximately seventeen-thousand children are screaming at each other. I see two supervisors on the playground, whose job it is to notice if anyone gets knocked out. I see no unconscious children; they are doing a good job.

The eight year old appears and then disappears. The six year old surfaces, and asks to go home with me. Several children stand in front of us, pointing me out to the six year old. Somewhere behind me, an older child of eight or nine shouts, “Fucker!”

Suddenly I spot the eight year old’s Juf – the teacher, underpaid and overworked. Teachers in The Netherlands have been sporadically striking for the same reasons as their British counterparts; workload, stress, pay. In terms of demoralising an entire profession, Britain is at risk of not standing out. Fortunately, the cluster-fuck that is Brexit will obliterate a good proportion of our dedicated teaching and support staff, so we should still have the edge.

I loiter near the Juf as the eight year old and his classmates assemble. A few more mothers appear to assist with the trip.

“Am I in your group, Mummy?” the eight year old asks.

“I don’t think there are groups,” I say.

“Can I pick my own walking partner?” asks the eight year old.

“I don’t think there are walking partners,” I say.

I notice a small boy crying at the back of the group. He is arguing with a bigger boy; both wear faces of fury.

“Ik denk er is een ruzie,” I say to the Juf in my terrible Dutch. I think there is a fight.

“Ah,” says the Juf, who ceremoniously bollocks both boys and sends the big one to the front of the group. She looks back to me and shrugs. “We zijn klaar.” 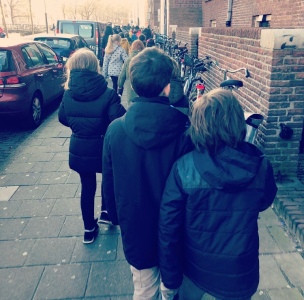 We walk to the bus stop, two classes of eight and nine year olds and about eight adults. A Dutch mother chats to me on the way.

“I never know whether to speak English or Dutch to English-speaking people,” she says.

“It is good if you speak Dutch, so I can practice,” I attempt to say in Dutch.

She replies something incomprehensible in Dutch and we both laugh heartily.

The bus arrives; three old people stare, bewildered, as the children infiltrate every last inch of the vehicle. The noise is riotous, and I watch an elderly lady close her eyes to escape the din. What must it be like, this imposition, this invasion? She does not open her eyes for the rest of the journey.

We arrive at the theatre.

“Wat is de voorstelling?” I ask in Dutch.

“I don’t know,” replies the Juf, in English.

We take our seats in the theatre. The eight year old puts his arm around me protectively. I am glad he is here.

The scene set before us is industrial, with a long rubbish chute stretching from ceiling to floor. A hovel-like den is arranged on one side. The lights dim, and rubbish bags fall from the chute. A man-boy with the look of Pete Doherty strolls on to the stage with a guitar, and a large bald man starts rummaging through the rubbish bags.

“Is he a tramp?” whispers the eight year old.

The bald man performs some rituals involving self-administered chiropody with Coke from a can, and then ricochets around his hovel, adjusting improvised furniture, sitting momentarily and then leaping up to grab and throw an apple. It becomes alarmingly apparent that is Dutch interpretive dance.

The rubbish chute rattles, and out falls a redheaded woman. She scuttles around beneath a sheet for a while before raising merry hell in the hovel, stealing the bald man’s apple, knocking over his furniture and climbing on his head. Pete Doherty jumps in and out, egging her on. They each bite the apple.

“I do not understand this at all,” whispers the eight year old.

“I don’t think we are meant to,” I whisper, because I think this is the point; all that we can predict, when other people fall into our lives without twenty-four hours’ notice, is that the result will be unpredictable. Things happen when you interact. But what if you don’t? What would we have seen, if the redheaded woman had not fallen down the chute? 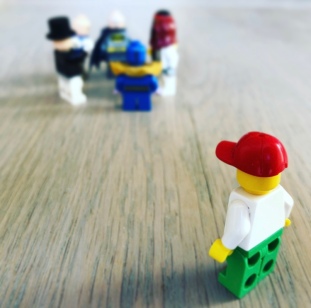 Our local paper, currently serving as my translation exercise book, last week reported a call for Aandacht Voor Eenzaamheid – Action For Loneliness. Loneliness will only grow, said the report, as the city grows, thanks to expats, migrants, students and the aging population. 13% of the population of Amsterdam assess themselves as “seriously lonely”; die zich wat verloren voelen in de drukte; those who feel lost in the crowds.

The UK now has a Minister for Loneliness, after a year-long investigation conducted by several large organisations found that social isolation is a growing epidemic. Age UK reported that social isolation “could be worse for a person’s health than smoking fifteen cigarettes a day”. As someone who has spent many more days smoking between zero and fifteen cigarettes than she has lonely, I’m interpreting this as good news for yours truly. Pretty sure I’m not missing the point. Our Minister for Loneliness has amassed international comment, mostly derisory, for its bureaucratic approach to a problem with innumerable idiosyncrasies, in the midst of a government whose defining feature is isolationism. Are you lonely? Or choosing to be alone? I think of the old lady on the bus, closing her eyes. Was she escaping the noise, or bathing in it?

The show finishes, with no discernable solution. The children are invited to ask questions. About a third of the children shoot their hands in the air.

“Does it hurt when you fall on the floor?”

“What happened to the apple?”

One thought on “What Happened To The Apple?”