Back in October, when I selflessly spent twenty four hours in Amsterdam’s fanciest spa hotel for My Lawyer’s fortieth birthday, I had a moment – five or six seconds – of unexpected existential crisis. A flicker of unsolicited self-examination, the type which takes you buy surprise when you are a Mindful Almost-Millennial. I am happy to question the terms of my existence, but only within the parametres of, say, an expensive chakra-balancing workshop, preceded by an explanatory pamphlet so there are no nasty surprises. I’d take some Instagrams as soon as I got there, put the Instagrams on Instagram, and then it’s done before the workshop starts, isn’t it? All there’d be left to do is fall asleep to chiming bells, or a crying nun, or some shit like that. Ideally, I’d like a certificate. “The Tears Of A Nun Hath Cleansed This Almost-Millennial.” Subtitle: “She’s Not Forty. Yet.”

But back to my Difficult Moment In Amsterdam’s Fanciest Spa Hotel, over breakfast. I was hungover, midway through a Joan Didion memoir and anticipating our return to the children, so I suppose you could say the scene was set for emotional trauma. Next to us: a Typical Older Dutch Man. I’m not saying that all Older Dutch Men look like Geppetto, but this guy was huge, had circle rimmed glasses and a cloud of white hair. He could have also been Dumbledore Undercover. Or Kevin Klein ‘s Maurice in Beauty and the Beast. Hey, I don’t want to generalise. I want all Older Dutch Men to be my Granddad, which isn’t a weird thing to say because both my actual Granddads are dead, so there are two spots open. If these last two paragraphs have told you anything, it is that I am a normal person under forty.

The rain was hammering down on the skylights above us. I looked up, sighing.

“We have our bikes,” I smiled, in a grand-daughterly way. “We live five minutes away.”

“Oh,” he said, shining his glasses on a rag, rolling his sleeves up. “Do you live here?”

“For work?” enquired Geppetto, as he tucked a pencil behind his ear and produced from nowhere a detailed blueprint of a needlessly complicated invention.

“My husband’s work,” I replied, which I always hate saying. One day I might pretend that we are here for my work, just to see how it feels. “He got a new job, so here we are!”

“For how long?” Geppetto asked, as he tested a wood-cutting machine to take to the Invention Competition up In The Big Town on market day. An axe spluttered into life; what do you know, it works! That will show them, those ignorant villagers. That will show them all.

“It’s a permanent job,” I said, a bluebird perching on my shoulder.

“Oh!” exclaimed Geppetto, whittling a small boy from an enchanted piece of wood. “So… you’re not ex-pats.”

It was a statement, not a question, and it pulled the rug out from beneath me. I’m not an ex-pat? I mean, if that’s true, then great; I don’t want to be an ex-pat. Ex-pats are spoilt white folk, who make sweeping generalisations about the native people of their current country of abode, spending their weekends at tennis clubs and spas. Wait, wait?

Surely, though, we are immigrants. Resettled in a new country, perhaps for a couple of years, perhaps forever. Ex-pats are posted; immigrants post themselves. Is this the distinction? The popular media’s face of immigration is not mine. The definition might be closer to the truth, but the contemporary connotations are not; I have not struggled to get here, I have not feared for my life. What am I appropriating, calling myself an immigrant? Who do I think I am?

I looked at Pinocchio on Geppetto’s knee, still green behind the ears, and envied the sapling clarity of his ambition. Everyone knows what he wanted to be.

In the end, I said, “No, I guess we’re not ex-pats.” Not because I agreed, but because it was what he wanted to hear, and I’m British, so I’m contractually obliged to explain what I mean by using words that seem to convey the opposite. The truth is, I wanted to agree, but living somewhere, I was increasingly discovering, means more than the location of your registered address. It means sinking your fingers into the soil, dirt beneath your fingernails, rooting. Becoming part of the landscape, breathing in and out with it, dechiphering each change in the wind. Standing still long enough to imbibe from the land so that, when you’re felled years from now, the growth rings of these years will track a slightly different orbit.

Do you live here?

And in the months that have followed, I have wondered. The kids are in a Dutch school, but they have been sticking with the English-speaking kids at playtime. I remember the Polish children at our old school in London, who spoke no English when they started school at four, and by Christmas they were conversational, out-stripping their parents’ English skills in a few short months. But they’d still seek each other out in the playground to jump back into Polish, trampolining freely around a language they called home. Not for nothing is it called your Mother Tongue.

And so it is for me. The further I get with Dutch, the more I crave English: I read more. I write more. My favourite local café, Dignita, has two waitresses from the south of England. “Hi, love,” they’ll say, throwing it around me like a blanket. This is my safe place, where I don’t have to rehearse lines before walking through the door. Google Translate can stand down. This is Den.

And it’s where I’m writing now, but today it’s busy, so I pack up early and head out, headphones on, feeling the best I’ve felt in weeks. Homesickness has ebbed away again, everyone is firmly back in their school routines, the sun is shining and, if I hurry, I’ll have time to buy myself some flowers before I pick up the three year old from Voorschool. I stand at the zebra crossing, where the man is red, but the road is clear so I nip across towards the flower stall.

Suddenly, a police car pulls up in front of me. The window winds down and the policeman beckons. I look around, and then realise he is summoning me, so I take off my headphones and walk over. I wonder, are they looking for someone? Has something happened?

Still puzzled, I root around in my bag for my UK driver’s license. Maybe I look like someone they are after. I wait for him to check my name and send me on my way.

“What gives you the right to behave like that?” he says.

This must be a dream. “Pardon?”

“We just watched you cross on red.”

I am struck mute. Later, I will think of possible things I should have said: that I didn’t know it was a rule, that I am still new, that in England you can cross the road if you like, but this man – this policeman – is so intimidating, so frightening, that all I manage is to squeak, “I’m sorry, I’m sorry.”

He looks at me furiously. I try to apologise in Dutch: Het spijt me. It makes no difference. As he glares at me, reiterating the arrogance of my disrespect, I think: if I am arrested now, who will collect the three year old from Voorschool? What will the three year old think, as he sees all the other parents come and go?

“Do you live here?” the policeman asks me.

“Yes,” I reply. This is all I can say without crying. I will not cry for him – it will either make him madder, or he will enjoy it. Neither are appealing.

The policeman takes a photo of my driver’s license and passes it back. He tells me I will get a fine, and then he leaves me on the corner of street, headphones in one hand, driver’s license in the other.

I walk past the flower stall, my jaw aching from grinding down tears. I walk all the way to Voorschool in wide-eyed shock, taking care to respect each and every stop sign, as teenagers wander down the middle of the street on their lunchbreak, and cyclists speed past whilst Face-Timing or dog-walking or juggling or blindfolded.

Do you live here? 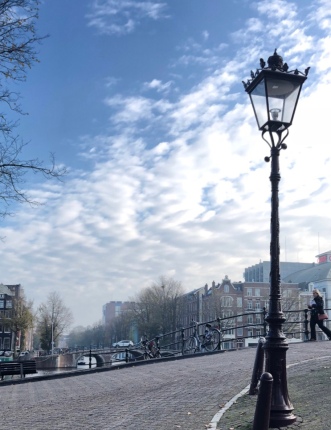