“I have literally no idea what is going on,” says the six year old.

It is the end of November and we are sitting on the tram, on our way to watch the Sinterklaasintocht – arrival of Sinterklaas. You may or may not know that Sinterklaas usually lives in Spain with Piet, his culturally insensitive sidekick, who we either won’t mention at all or we’ll write an entire blog post about. There’s not a great deal of grey area when it comes to Piet. It’s pretty black and white.

“Okay,” I say. “Sinterklaas is arriving into town today with some…. helpers. And they’re going to see how all the children behave because in a few weeks it will be Sinterklaas-“

“I thought Sinterklaas was a person,” says the six year old.

“But you just said it was a day,” frowns the six year old.

The children look at him.

I shrug. “You could say there’s a dark side.”

I have chosen, as our Intocht viewing point, the Magere Brug, which means skinny bridge. It’s no skinnier than most other bridges, but it used to be. Maybe that’s what drew me to it. The Magere Brug is only used by pedestrians and cyclists, and straddles the wide Amstel river which gives us a good chance of seeing something, because Sinterklaas arrives by steamboat.

We arrive at the bridge at ten, because the internet told me to. The bridge is closed to cyclists – imagine! – and this is the extent of the health and safety measures taken. Children peer through child-wide gaps on the bridge. I commit to two hours of clinging to the three year old, as if his life depends on it, because it does. 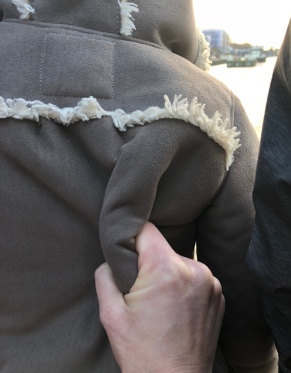 “Where will he arrive from?” shouts the six year old, looking nervously around.

“I’ve no idea!” I say, clinging, white-knuckled, to the three year old.

“What’s his boat like?” asks the eight year old, in an encouraging bid to re-engage with reality.

When the adults are also clueless, the magic is truly alive.

It rains a little – maybe six or seven times. The temperature veers between tit-freezing and bollock-shrinking. The children eat all the snacks in the first twenty minutes. Dutch children sing Sinterklaas songs and cyclists tut about having to find another bridge to cross.

Then, close to eleven o clock, we hear a distant foghorn.

“SANTA’S COMING!” yell our children. Dutch parents glance over at us. I perform the customary British apologetic grimace.

“SANTA! SANTA!” shouts the three year old, jumping up and down. I tighten my grip on his coat.

A fleet of boats arrive, carrying Amsterdam’s more culturally-aware Pieten. They dance, wave and whip up a general hullaballoo. The steamboat chugs into view.

“Is that Sinterklaas?” asks the six year old.

“He looks like a bishop,” says the eight year old.

Sinterklaas waves regally as the steamboat disappears beneath the boat and then makes its way up the Amstel to the Maritime Museum, where he will disembark to get on his horse for a walking parade around the city.

“He didn’t give me a present,” says the three year old.

“What now?” says My Lawyer, in the same desperate tone as the children.

“The internet told me to have lunch and then see the parade,” I say.

The walking parade is more exciting. The culturally-sensitive Pieten rollerblade, sing, perform acrobatics and churn out pepernoten biscuits to the crowd. The more prepared attendees have brought bags; I give the kids my hat to proffer for sweets. Sinterklaas sweeps by on his horse, shaking the hands of a chosen few.

“He didn’t give me a present again!” grumbles the three year old.

It starts to rain for the seventeenth time, and we head home.

We see our Dutch neighbour as we arrive back at the flat. He smiles at the children. “Have you been somewhere exciting?” he asks knowingly.

Our neighbour smiles. “Now you have to put your shoes out in the night for him!”

The six year old glances up at me nervously. “What’s he going to do with my shoes?”

I bundle the kids into the flat, explaining to them that, for the next two weeks, Sinterklaas will send his culturally-sensitive Amsterdammer Piets to keep an eye on how children are behaving, so he knows whether to deliver presents to them on the evening of December 5th. .

“Is that Christmas Day?” asks the six year old.

“No, it’s Sinterklaas,” I say, for the thousandth time.

“This is a 94 plus 45 hit points,” says the eight year old from behind a large book.

My Lawyer stays outside, locking up the bikes.

“You do know,” says our neighbour, in hushed tones to My Lawyer, “that I am Sinterklaas?”

My Lawyer looks around. The coast is clear; the six and three year olds are arguing with me about Sinterklaas’s apparent lack of commitment and the eight year old is deep in the Forgotten Realm.

My Lawyer leans towards our neighbour. “Let’s talk.”

For the following two weeks, Amsterdam goes Sinterklaas crazy. Schools decorate their halls and prepare a large chair for the big man’s visit. Shops invite children to leave shoes overnight to get little gifts from sponsored, brand-loyal Piets. Children pretend to behave well so that a city-wide team of acrobats might occasionally leave large chocolate letters in their shoes overnight. The mice in our apartment have never had it so good.

The fifth of December is a Tuesday. Sinterklaas visits each and every school in a single morning, and school finishes early. We eat an early dinner listening to seasonal carols, and just as we’re clearing up, there’s a knock at the door.

“Remember we said that Santa was a different-“

But they are already at the door, ushering in a white-bearded old man in robes and a tall bishop’s hat. He is accompanied, inexplicably, by our neighbour’s wife.

“Mind if I sit down?” says Sinterklaas.

Sinterklaas opens his book, looks around the room and frowns. “Why do I hear Christmas carols?”

The next morning, I am outside unlocking Steve the Bakfiets ready for the school run, and our neighbour leaves his house.

“More than well,” I say. “Thank you so much. They were spellbound. How was the rest of your evening?”

“It’s a funny thing,” he says, “wearing those clothes. Even grown ups are affected.”

“Here on the street, after I left you, a guy came up to me, he asked for a selfie! Can you believe? A Sinter-selfie! And then a lady,” he says, pausing to find the right words. “She came over to me and said, ‘Sinterklaas, Sinterklaas, please grant me a wish’.”

The children thunder down the stairs with their school bags, fighting and shouting. I do not look away from our neighbour.

He shrugs. “I said she will have to wait, and see.”

At school, the Ouderraad – Dutch PTA – are busily boxing up Sinterklaas decorations and replacing them with fairy lights and tinsel.

“What are they doing?” asks the six year old.

“Getting ready for Christmas,” I reply.

“But that was yesterday,” she frowns.

“No, that was Sinterklaas,” I explain. Again. “Now it’s Christmas.”

The six year old sighs. “I have literally no idea what is going on.”